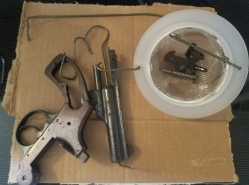 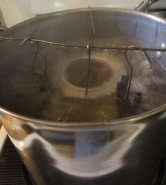 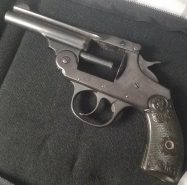 DISCLAIMER: I am not a gunsmith. I pretty much just copied what a real gunsmith does, and even he says not to attempt it. I took a risk doing this without proper training, experience, and tools, but I calculated the risk and decided that I could do it.

This is an Iver Johnson .32 revovler. It was handed down to the sister of a family friend and I decided that I'd like to try my hand at converting the rust on it. It really didn't have that much rust on it, but there was(and still is) pitting on the barrel, and there was some places where the finish had been stripped.

The method for converting rust is very simple. We got a steel pot from Walmart for 8 dollars, a wire coat hanger that was bent into hooks and a rod for holding them up, a drain trap to hold the small parts, and a bottle of cold bluing solution. What you do is disassemble the firearm, hang it in a pot of water, and keep the water at a rolling boil for about 40 minutes, adding water if necessary. Then, you take the parts out, card them(with fine steel wool or a carding wheel on a motor/drill), and when you've done that however many times you deem necessary, you soak it in kerosene overnight.

If you wanted to take this a step further, you could rust blue the sections where the finish has been rubbed off. That would involve a rust blue solution and a steaming chamber(which can simply consist of a clothes steamer and a cardboard box), but I decided to just use cold blue solution.

If you look at the 3rd picture, you'll see some pitting that the rust caused. Pitting is literally where rust has eaten into the metal, and it's impossible to completely revert. It's unfortunate, but unnoticable from a reasonable distance. Also, we gave the cylinder to a gunsmith, because it was missing the ejector star.

Update: the gunsmith did not have a star that fit. Because these were made pretty cheap, the parts are hand-fit. Bummer. 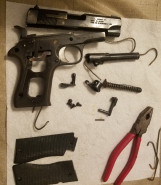 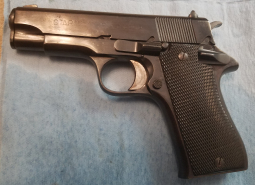 Speaking of stars, here's my brother's Star BM. Fun fact about this pistol; it's Spanish police surplus, and back in the 80s and 90s, movies that wanted to have M1911s and didn't want to spend a lot on them just used these, because they look pretty similar.

Again, I disassembled the gun as far as I felt I reasonably could, boiled and carded twice, then soaked in kerosene. There was no pitting on this one, but there were more spots where the finish had been removed. For some reason the barrel, on the top of the chamber(which shows through the ejection port), had all of the finish taken off of it. I'm not sure whether or not this was something that was done to make it look "cooler", but I decided to put some cold blue on it(which you can see in the last image). The rest of the barrel was blued, so I saw no reason that this area shouldn't be, and it's not like there were clean lines between the blue and the white.

Both of these came out very well, and it was very rewarding to see the final result. It's crazy to think that some "gunsmiths" will take a full on wire wheel to guns when this is what a pot of water can do!

This project really starts with some rocks. I was looking around in my container which I store rocks in and I found a few rocks which I though would look good as the parts of the windchime. I also got a few out to practice drilling rocks with my new Amazon 1.5mm diamond-coated drill bits, which I put in my dremel with some electrical tape to fill the space in the collet. The test rocks came out good, and after some deliberation, I drilled the dinger(?) part and the hanger(??) parts so that they would accept monofiliment cord.

The windchimes are made of stainless steel straws, 6 in total. I used a dremel with the cutoff disc to cut them to size. Two of the straws are uncut, one which is 10 inches and another which is 9 inches; the other ones step down in 1 inch increments. After they were cut to size, I deburred the inside and filed the outside so it's not as sharp. Then, I used the cutoff disc again to cut holes which more monofiliment cord would be threaded through. I messed up while doing this, making one side of holes higher than the other, but they seem to sit OK on the cord nonetheless.

The base(?) is made of a small section of large dowel that I cut off with no particular size in mind. I used a drill with a small drill bit to drill the middle hole(it came out off-axis but that's fine) and then used some visual calculus to drill the other 6 holes. I never tried to get any of it exact. After the holes were drilled, I cut one of the cleaning rods that came with the straws off so that the hoop at the end could serve as an attachment point. I ended up having to do that again, though, because I got wood finish and polyurethane all over it when finishing the base. I used one coat of finish and three coats of polyurethane, not sanding. Screw sanding. The wood sucked up most of it anyways.

I assembled the rocks first, threading the cord through the dinger, then tying it on the hanger, tied on the other side to the attachment point, which I bent 90 degrees at the end so it wouldn't come off and could hold the cord. I then took it off to finish the base. After the base was done, I took the straws and threaded the cord through a hole from the top, then into the straw, and finally going back out to the top, and the cord being stretched to the other hole, where the process repeated. When I was done, I tied both sides around the shaft of the attachment dongle, tied them around it, and superglued them in place. I also tied around and superglued the hanger/dinger cord where the shaft bent 90 degrees.

In all, I'm very happy with how it came out. The chimes sound great when hitting each other, as well as the dinger. I hope my mom appreciates it.

Edit after Christmas: I put the chimes in a little makeup bag I got for here off of Amazon, and she was very surprised and happy to open it up and see the chimes.